Read the featured story in The Current about the Artists in Schools program.

Now in its third year, the IHC’s Artists in Schools program aims to enrich the quality of academic preparation and educational equity for both students and parents in Santa Barbara area elementary schools. In the program, UCSB graduate students, as Artists, Curators, and Theater Teachers in Residence, teach and mentor K-6 students in eight-week-long courses in art, art history and curation, and theater in after school programs at local elementary schools. There are also workshops that take place on the UCSB campus in the art and theater studios, and the yearlong program culminates in an art exhibit and a dramatic performance of the students’ work at UCSB for the students’ families.
Students in the art classes study drawing, painting, photography, and collage and learn about the expressive potential of elements such as colors and patterns; they also learn how to curate an exhibition of their own work. By utilizing arts techniques, they are encouraged to make art that tells a story about their neighborhood and local environment. Students in the theater classes study the building-blocks of theater and acquire tools of acting (character analysis, focus, attention-building, delivery, voice, and body expression). They also write and memorize short monologues and learn how to work together in an ensemble.

Questions about the Artists in Schools program can be directed to IHC Associate Director Erin Nerstad, nerstad@ihc.ucsb.edu

In “From Picture to Performance,” students learn stage composition through the use of photographs, stage areas, levels, and body and facial expression. They also learn how to create character movement and dialogue. 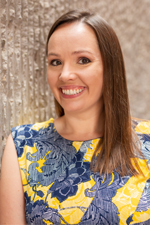 Alesha Claveria
Is a fifth-year PhD candidate in UCSB’s Department of Theater and Dance and a 2019 Public Humanities Graduate Fellow. She currently holds an M.S. in Public Relations and an M.F.A. in Creative Writing-Fiction. Her experience working with the kids and teens of the Isla Vista Teen Center in UCSB’s Nuestra Voz summer theater camp program over the past four summers reflects her belief in the importance of theater education for young people’s sense of self, social development, and community awareness. Her research interest is in Native North American drama and Indigenous Studies. Born and raised in the wilds of Montana, Claveria’s interests are influenced by the people and cultures of the Great Plains and Pacific Northwest. 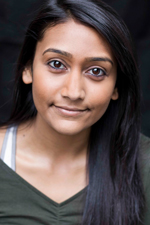 Ash Raju
Is an exchange student from New Zealand studying film and media at UCSB. She’s also a New Zealand screen actor, doing mostly short films and commercials, and came to California to expand on her acting. Being an actor has always been her biggest aspiration, and she is excited to mentor others interested in acting.

“Think Local, Think Global” is a global survey of art and architectural history that teaches students to look closely and think carefully. Each week, students learn global examples of famous works of art, look closely and describe them, think carefully about what they mean, and begin to think about how they can relate these themes and monuments to their own lives and environments. Each week, students work through a theme that relates to their everyday life, such as art and animals, or art and the earth. Students then draw works of art that they curate and present as an exhibition. 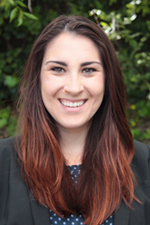 Rachel Winter
Is a second-year Ph.D. student in the History of Art and Architecture at UCSB researching contemporary artists from the Arab world. She is specifically interested in how museums around the world collect and display contemporary Arab, Iranian, and Turkish artists post 9/11. Throughout her tenure at UCSB, Rachel served as a Teaching Assistant for art history surveys ranging from ancient to medieval, Renaissance to Baroque, modern to contemporary, and the history of photography. Rachel received her M.A. from the University of Iowa in Interdisciplinary Studies: Islamic & Middle Eastern Studies under the mentorship of Dr. Ahmed Souaiaia in 2017. During her M.A., Rachel received the award for Outstanding Graduate Student in Islamic Studies, and taught courses in Sociology, Religious Studies, and History. In 2015, Rachel received her B.A. with honors in Art History from the University of Iowa focusing on critical theory and conceptual art. Rachel also worked in museum education, including educational materials on protest art created during the Arab Spring. 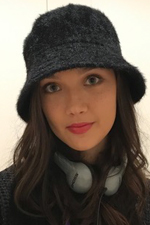 Misha Farrahi
Is a second-year undergraduate student majoring in Art History and is interested in the history of photography and art theory. Misha has interned at the UCSB Glass Box Gallery and at the University of San Diego Eating Disorders Clinic, where she was able to engage in close studies of the human brain as well as certain behavioral tendencies. This experience helped to shape Misha’s interest in art history, because within this major she gets to explore her love of history as well as better understand the psychological human condition during various periods through artistic expression.

Click here to learn more about past Artists in Schools instructors and courses.