“There’s a good deal to everything”: Country Communicability on Early Commercial Sound Recordings in the U.S.

Home > Upcoming Events  > “There’s a good deal to everything”: Country Communicability on Early Commercial Sound Recordings in the U.S.

06 Apr “There’s a good deal to everything”: Country Communicability on Early Commercial Sound Recordings in the U.S. 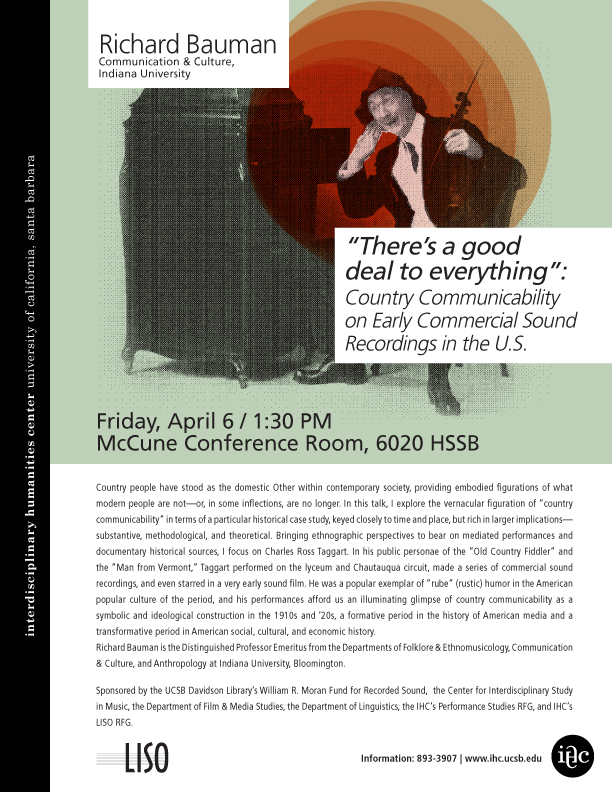 Country people have stood as the domestic Other within contemporary society, providing embodied figurations of what modern people are not—or, in some inflections, are no longer. In this talk, I explore the vernacular figuration of “country communicability” in terms of a particular historical case study, keyed closely to time and place, but rich in larger implications—substantive, methodological, and theoretical. Bringing ethnographic perspectives to bear on mediated performances and documentary historical sources, I focus on Charles Ross Taggart. In his public personae of the “Old Country Fiddler” and the “Man from Vermont,” Taggart performed on the lyceum and Chautauqua circuit, made a series of commercial sound recordings, and even starred in a very early sound film. He was a popular exemplar of “rube” (rustic) humor in the American popular culture of the period, and his performances afford us an illuminating glimpse of country communicability as a symbolic and ideological construction in the 1910s and ‘20s, a formative period in the history of American media and a transformative period in American social, cultural, and economic history.

Richard Bauman is the Distinguished Professor Emeritus from the Departments of Folklore & Ethnomusicology, Communication & Culture, and Anthropology at Indiana University, Bloomington.