The Year Before the Flood

Home > Series  > Oil+Water  > The Year Before the Flood

27 Oct The Year Before the Flood 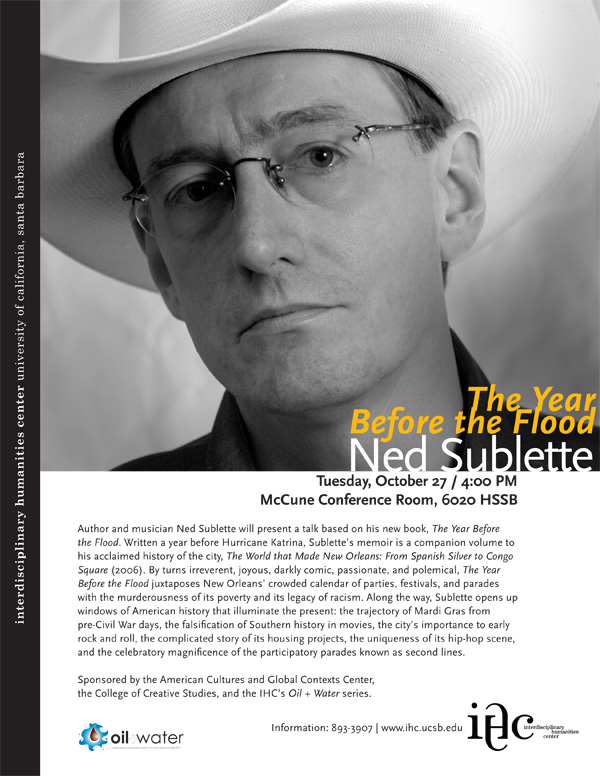 Author and musician Ned Sublette will present a talk based on his new book,The Year Before the Flood.   Written a year before Hurricane Katrina, Sublette’s memoir is a companion volume to his acclaimed history of the city, The World that Made New Orleans: From Spanish Silver to Congo Square (2006).  By turns irreverent, joyous, darkly  comic, passionate, and polemical, The Year Before the Flood juxtaposes New Orleans’ crowded calendar of parties, festivals, and  parades with the murderousness of its poverty and its legacy of  racism. Along the way, Sublette opens up windows of American history  that illuminate the present: the trajectory of Mardi Gras from pre-Civil War days, the falsification of Southern history in movies, the city’s importance to early rock and roll, the complicated story of its housing projects, the uniqueness of its hip-hop scene, and the celebratory magnificence of the participatory parades known as second lines.
Sponsored by the American Cultures and Global Contexts Center, the College of Creative Studies, and the IHC’s Oil + Water series.