Globalization, the Commons, and the Limits of Democracy

Home > Series  > Public Goods  > Globalization, the Commons, and the Limits of Democracy

08 Mar Globalization, the Commons, and the Limits of Democracy 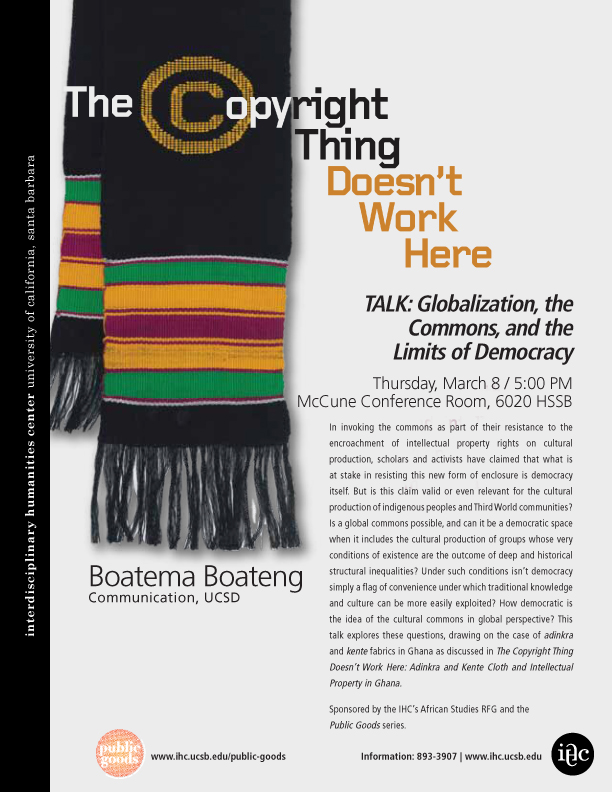 In invoking the commons as part of their resistance to the encroachment of intellectual property rights on cultural production, scholars and activists have claimed that what is at stake in resisting this new form of enclosure is democracy itself. But is this claim valid or even relevant for the cultural production of indigenous peoples and Third World communities? Is a global commons possible, and can it be a democratic space when it includes the cultural production of groups whose very conditions of existence are the outcome of deep and historical structural inequalities? Under such conditions isn’t democracy simply a flag of convenience under which traditional knowledge and culture can be more easily exploited? How democratic is the idea of the cultural commons in global perspective? This talk explores these questions, drawing on the case of adinkra and kente fabrics in Ghana as discussed in The Copyright Thing Doesn’t Work Here: Adinkra and Kente Cloth and Intellectual Property in Ghana.

Sponsored by the IHC’s African Studies RFG and the IHC’s Public Goods series.

Click here to listen to a recording of this talk from the IHC’s series Public Goods.