The Cove: Filming and Thinking though the Dolphin-Human Interaction

Home > Series  > The Cove: Filming and Thinking though the Dolphin-Human Interaction

04 Nov The Cove: Filming and Thinking though the Dolphin-Human Interaction

Posted at 17:00h in Series, Oil+Water, IHC Series by Admin 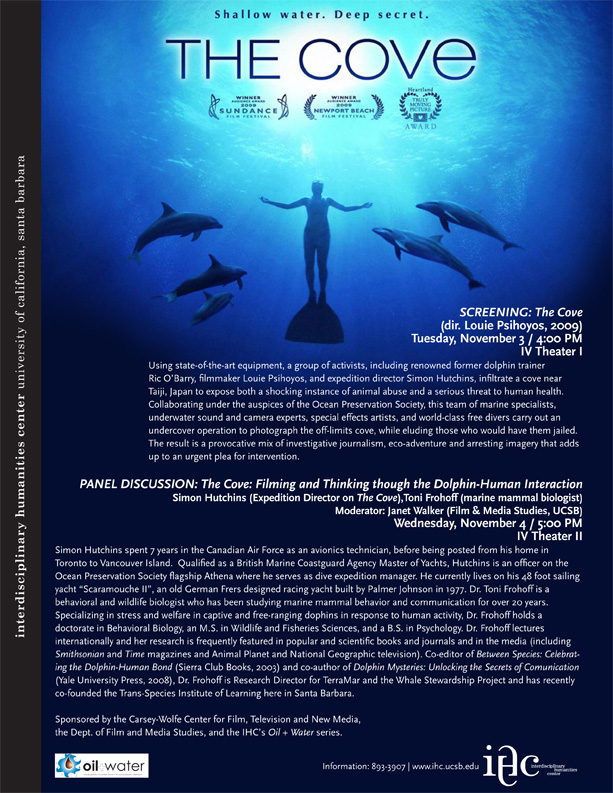 Simon Hutchins spent 7 years in the Canadian Air Force as an avionics technician, before being posted from his home in Toronto to Vancouver Island. Qualified as a British Marine Coastguard Agency Master of Yachts, Hutchins is an officer on the Ocean Preservation Society flagship Athena where he serves as dive expedition manager. He currently lives on his 48 foot sailing yacht “Scaramouche II”, an old German Frers designed racing yacht built by Palmer Johnson in 1977. Dr. Toni Frohoff is a behavioral and wildlife biologist who has been studying marine mammal behavior and communication for over 20 years. Specializing in stress and welfare in captive and free-ranging dophins in response to human activity, Dr. Frohoff holds a doctorate in Behavioral Biology, an M.S. in Wildlife and Fisheries Sciences, and a B.S. in Psychology. Dr. Frohoff lectures internationally and her research is frequently featured in popular and scientific books and journals and in the media (including Smithsonian and Time magazines and Animal Planet and National Geographic television). With nature writer Brenda Peterson, she is co-editor of the anthology, Between Species: Celebrating the Dolphin-Human Bond (Sierra Club Books, 2003). Most recently with Dr. Kathleen Dudzinski, she co-authored the book, Dolphin Mysteries: Unlocking the Secrets of Communication (2008, Yale University Press). Currently, Frohoff is Research Director for both TerraMar Research and the Whale Stewardship Project.

Sponsored by the Carsey-Wolfe Center for Film, Television and New Media, the Dept. of Film and Media Studies, and the IHC’s Oil + Water series.