The Beach Boys: Classified Research with a Southern California Vibe 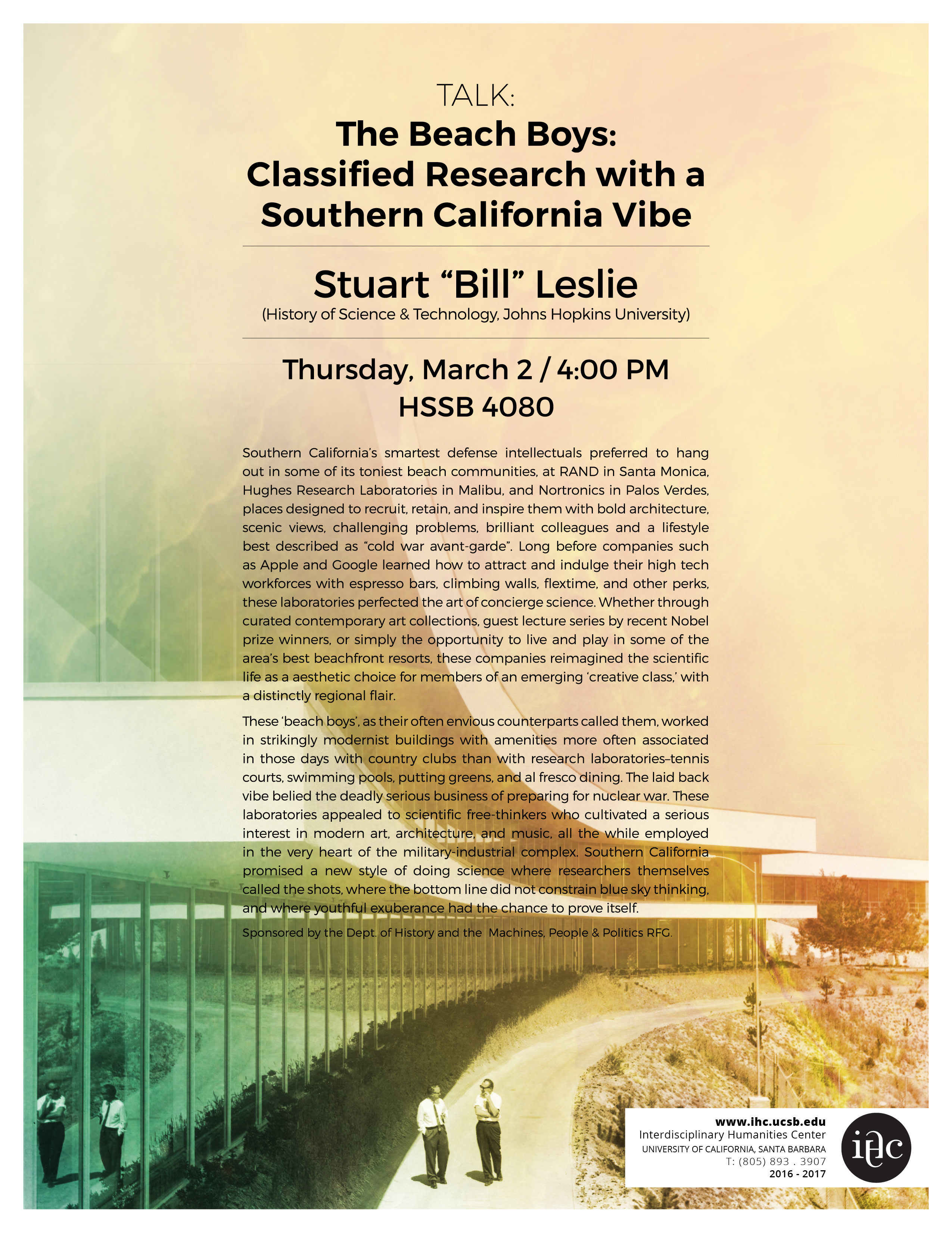 Southern California’s smartest defense intellectuals preferred to hang out in some of its toniest beach communities, at RAND in Santa Monica, Hughes Research Laboratories in Malibu, and Nortronics in Palos Verdes, places designed to recruit, retain, and inspire them with bold architecture, scenic views, challenging problems, brilliant colleagues and a lifestyle best described as “cold war avant-garde”. Long before companies such as Apple and Google learned how to attract and indulge their high tech workforces with espresso bars, climbing walls, flextime, and other perks, these laboratories perfected the art of concierge science. Whether through curated contemporary art collections, guest lecture series by recent Nobel prize winners, or simply the opportunity to live and play in some of the area’s best beachfront resorts, these companies reimagined the scientific life as a aesthetic choice for members of an emerging ‘creative class,’ with a distinctly regional flair.

These ‘beach boys’, as their often envious counterparts called them, worked in strikingly modernist buildings with amenities more often associated in those days with country clubs than with research laboratories–tennis courts, swimming pools, putting greens, and al fresco dining. The laid back vibe belied the deadly serious business of preparing for nuclear war. These laboratories appealed to scientific free-thinkers who cultivated a serious interest in modern art, architecture, and music, all the while employed in the very heart of the military-industrial complex. Southern California promised a new style of doing science where researchers themselves called the shots, where the bottom line did not constrain blue sky thinking, and where youthful exuberance had the chance to prove itself.

Bill Leslie has taught the history of science and technology at Johns Hopkins University since 1981. He has written on industrial research, Cold War science, corporate architecture, and most recently the architecture of science. Much of his recent work looks at science and technology in the developing world—Iran, India, and Pakistan—and at the aerospace industry in Southern California. He is currently writing a history of Johns Hopkins University.

Sponsored by the Dept. of History and the  Machines, People & Politics RFG.