Revolution as Storytime: The Uprisings of 2011 and the Art of Viral Narrative

Home > Endowments  > Revolution as Storytime: The Uprisings of 2011 and the Art of Viral Narrative

06 Apr Revolution as Storytime: The Uprisings of 2011 and the Art of Viral Narrative 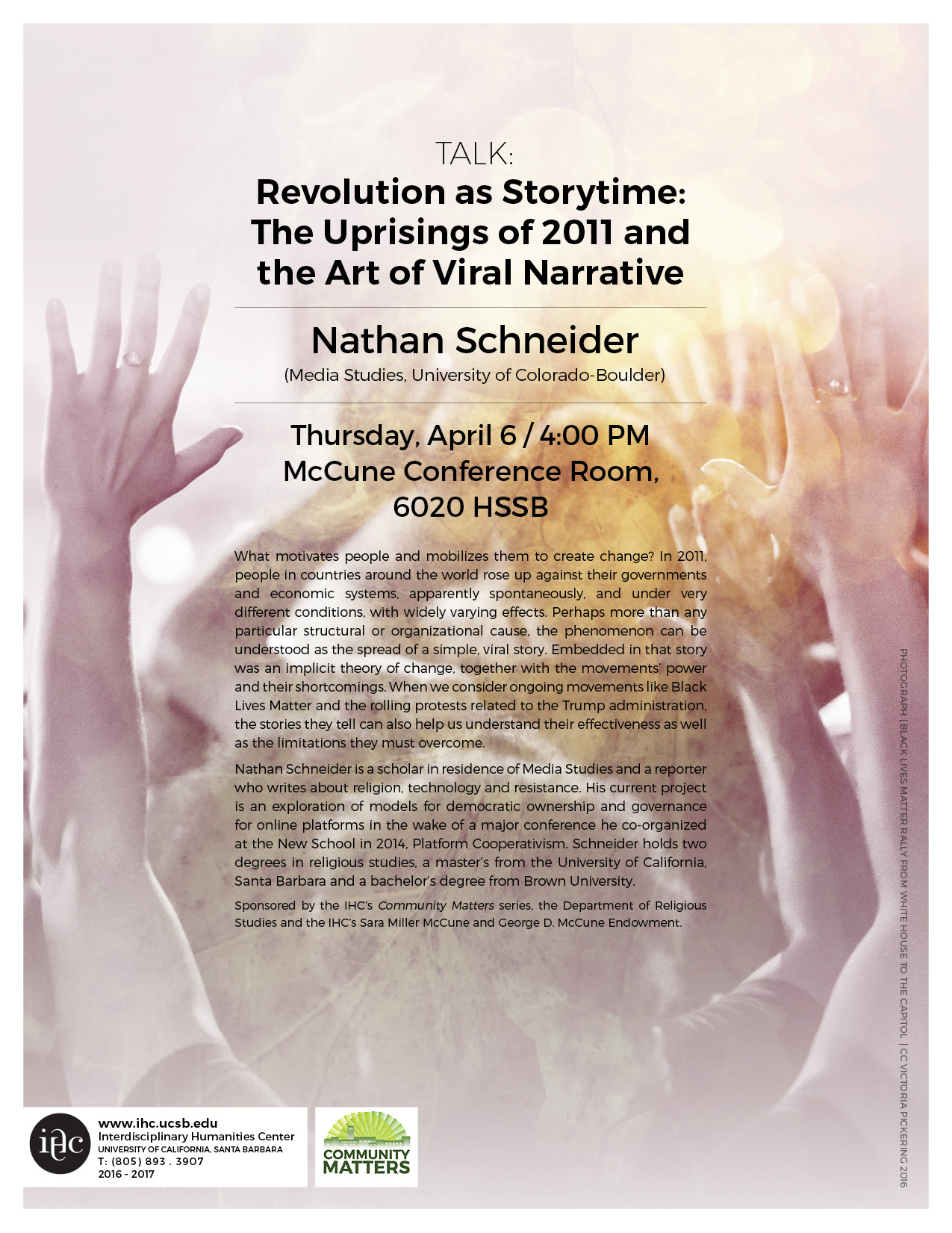 What motivates people and mobilizes them to create change? In 2011, people in countries around the world rose up against their governments and economic systems, apparently spontaneously, and under very different conditions, with widely varying effects. Perhaps more than any particular structural or organizational cause, the phenomenon can be understood as the spread of a simple, viral story. Embedded in that story was an implicit theory of change, together with the movements’ power and their shortcomings. When we consider ongoing movements like Black Lives Matter and the rolling protests related to the Trump administration, the stories they tell can also help us understand their effectiveness as well as the limitations they must overcome.

Nathan Schneider is a scholar in residence of Media Studies and a reporter who writes about religion, technology and resistance. His current project is an exploration of models for democratic ownership and governance for online platforms in the wake of a major conference he co-organized at the New School in 2014, Platform Cooperativism. He is the author of two books, God in Proof: The Story of a Search from the Ancients to the Internet and Thank You, Anarchy: Notes from the Occupy Apocalypse, both published by University of California Press. His articles have appeared in The Chronicle of Higher Education, The New Republic, Harper’s Magazine, The Nation, The Catholic Worker, Religion Dispatches and other outlets. He writes a column for America, a national Catholic weekly, as well as a finance column Vice magazine. Media appearances have included The Takeaway, Democracy Now, On Being, HuffPost Live and The Brian Lehrer Show. As an editor, Schneider co-founded the news website Waging Nonviolence and helped relaunch the online literary magazine Killing the Buddha. He has also helped organize projects with the Social Science Research Council about religion and media since 2008, including The Immanent Frame and Frequencies. Schneider holds two degrees in religious studies, a master’s from the University of California, Santa Barbara and a bachelor’s degree from Brown University.

Sponsored by the Department of Religious Studies and the IHC’s Community Matters series.