While most readers are familiar with the Narrative of the Life of Frederick Douglass, an American Slave (1845), Levine will discuss Douglass’ final autobiography, Life and Times of Frederick Douglass (1881, 1892), focusing on the account of Douglass’ 1877 meeting with his former master Thomas Auld. Breaking with earlier readings of this meeting as a moment of reconciliation, Levine reconsiders this fascinating encounter in the context of Douglass’ other autobiographical writings and his politics of Reconstruction.

Guggenheim and MLA Lifetime Achievement award-winning Robert S. Levine is Professor of English and Distinguished University Professor at the University of Maryland, College Park. Author of Conspiracy and Romance (1989), Martin Delany, Frederick Douglass, and the Politics of Representative Identity (1997), and Dislocating Race and Nation (2008), as well as General Editor of the Norton Anthology of American Literature, Levine is editor or co-editor of over 20 volumes, including the new Yale cultural and critical edition of Douglass’ The Heroic Slave (2015). The talk is drawn from his just published book, The Lives of Frederick Douglass (Harvard University Press, 2016).

Sponsored by the IHC’s  Slavery, Captivity, and the Meaning of Freedom RFG. 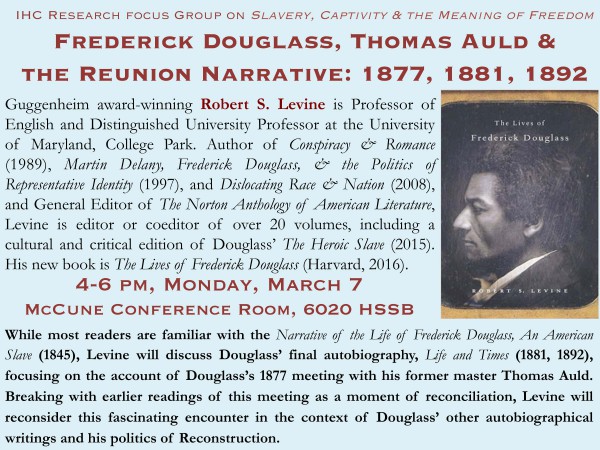 Slavery Captivity and the Meaning of Freedom RFG