The Story of Making Change

12 Apr The Story of Making Change 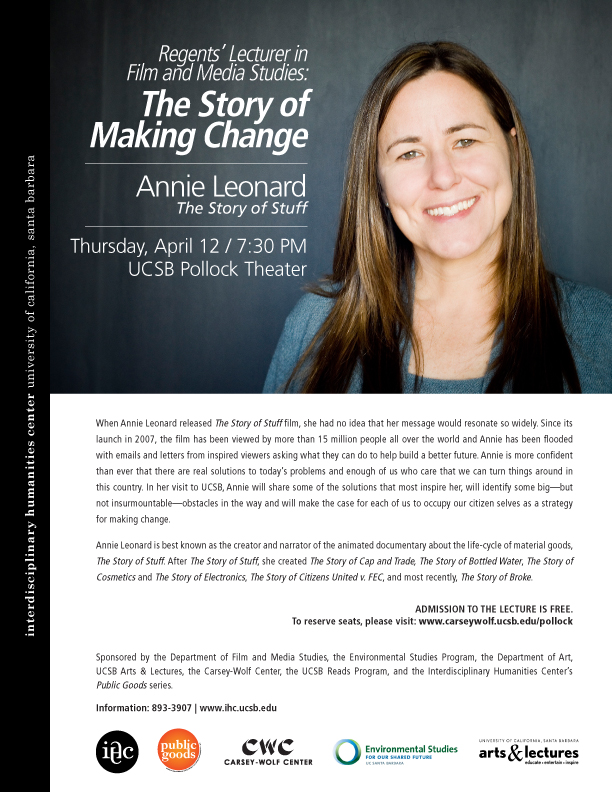 When Annie Leonard released The Story of Stuff film, she had no idea that her message would resonate so widely. Since its launch in 2007, the film has been viewed by more than 15 million people all over the world and Annie has been flooded with emails and letters from inspired viewers asking what they can do to help build a better future. Annie is more confident than ever that there are real solutions to today’s problems and enough of us who care that we can turn things around in this country. In her visit to UCSB, Annie will share some of the solutions that most inspire her, will identify some big—but not insurmountable—obstacles in the way and will make the case for each of us to occupy our citizen selves as a strategy for making change.

Admission to the lecture is free.  To reserve seats, please visit: http://www.carseywolf.ucsb.edu/pollock

Sponsored by the Department of Film and Media Studies, the Environmental Studies Program, the Department of Art, UCSB Arts & Lectures, the Carsey-Wolf Center, the UCSB Reads Program, and the Interdisciplinary Humanities Center’s Public Goods series.