11 May Transnational Star Deities and Devotional Fandom: A Case of USA Rajinikanth Fans

Posted at 11:40h in Upcoming Events by Admin 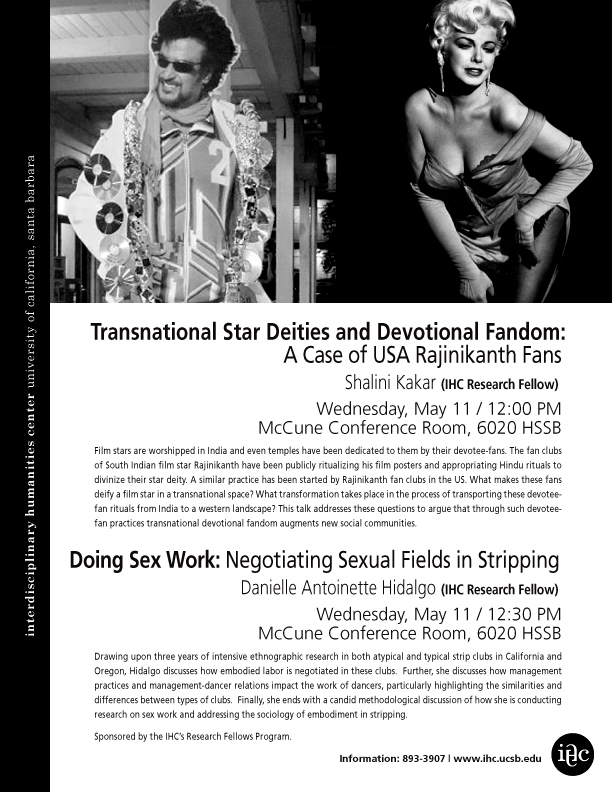 Film stars are worshiped in India and even temples have been dedicated to them by their devotee-fans. The fan clubs of South Indian film star, Rajinikanth have been publicly ritualizing his film posters and appropriating Hindu rituals to divinize their star deity. A similar practice has been started by Rajinikanth fan clubs in the US. Mostly comprising of engineers working for companies such as Google and Yahoo, these US based devotee-fans of Rajinikanth worshipped a garlanded poster of his recent film, Endhiran (Robot) released in September 2010.  In the Serra Theatre in Milpitas, they held a special worship ritual followed by euphoric dancing. In the opening scene of Endhiran, when Rajinikanth appeared on the screen for the first time, his devotee-fans ran towards it to ritualize his image with lighted camphor, a practice followed for images of deities in Hindu temples. What makes these fans deify a film star in a transnational space? What transformation takes place in the process of transporting these devotee-fan rituals from India to a western landscape? This talk addresses these questions to argue that through such devotee-fan practices transnational devotional fandom augments new social communities.