Painting the History of a City: Early Municipal Art Collecting in Lima, Peru

Posted at 15:30h in Upcoming Events by Admin 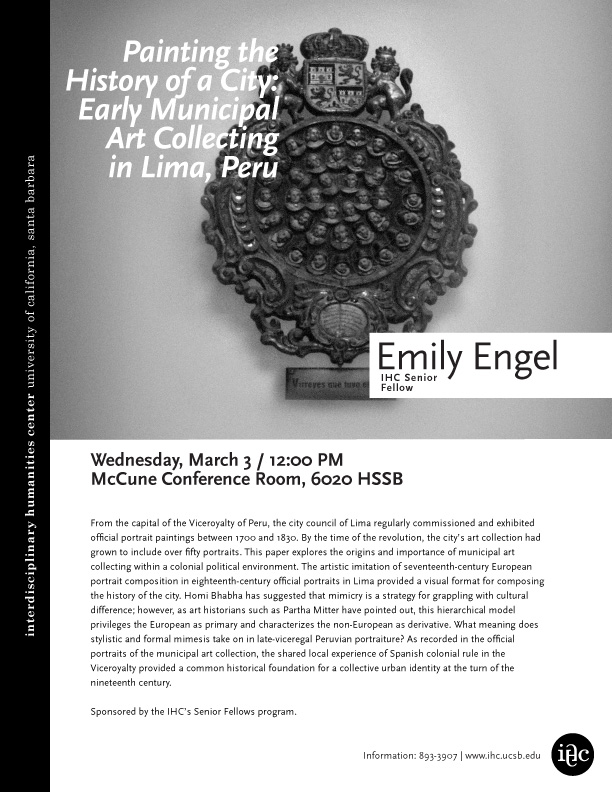 From the capital of the Viceroyalty of Peru, the city council of Lima regularly commissioned and exhibited official portrait paintings between 1700 and 1830. By the time of the revolution, the city’s art collection had grown to include over fifty portraits. This paper explores the origins and importance of municipal art collecting within a colonial political environment. The artistic imitation of seventeenth-century European portrait composition in eighteenth-century official portraits in Lima provided a visual format for composing the history of the city. Homi Bhabha has suggested that mimicry is a strategy for grappling with cultural difference; however, as art historians such as Partha Mitter have pointed out, this hierarchical model privileges the European as primary and characterizes the non-European as derivative. What meaning does stylistic and formal mimesis take on in late-viceregal Peruvian portraiture? As recorded in the official portraits of the municipal art collection, the shared local experience of Spanish colonial rule in the Viceroyalty provided a common historical foundation for a collective urban identity at the turn of the nineteenth century.