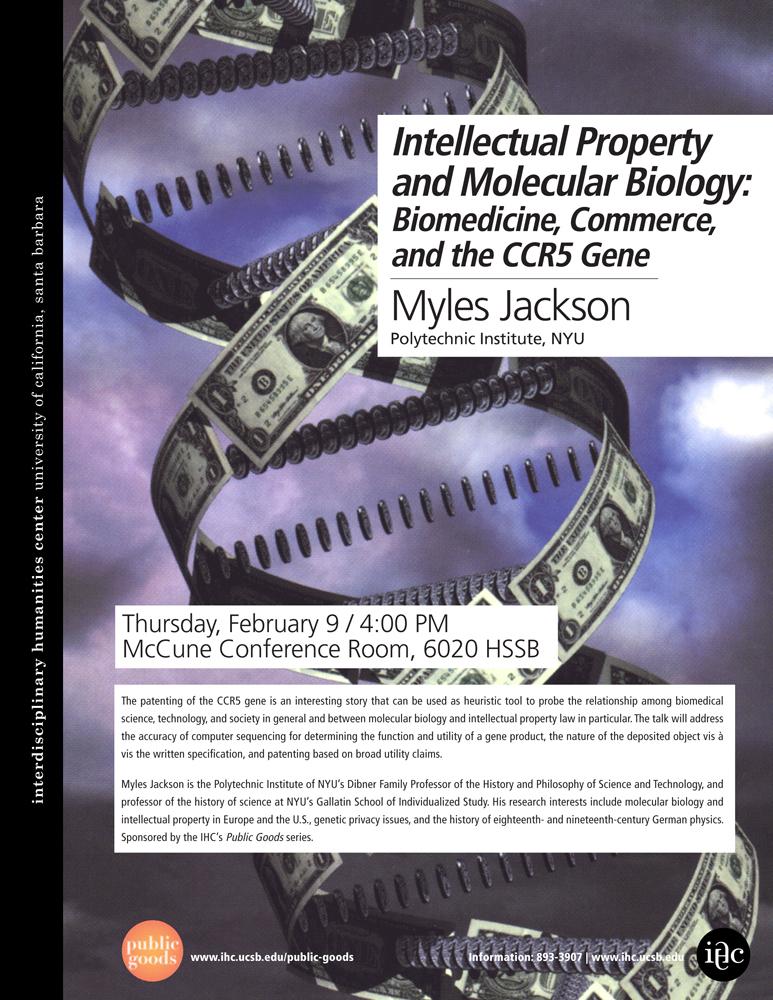 The patenting of the CCR5 gene is an interesting story that can be used as heuristic tool to probe the relationship among biomedical science, technology, and society in general and between molecular biology and intellectual property law in particular. The talk will address the accuracy of computer sequencing for determining the function and utility of a gene product, the nature of the deposited object vis à vis  the written specification, and patenting based on broad utility claims. Myles Jackson is  the Polytechnic Institute of NYU’s Dibner Family Professor of the History and Philosophy of Science and Technology, director of science and technology studies at NYU-Poly,  professor of the history of science at the Gallatin School of Individualized Study, senior faculty fellow of NYU-Poly’s Othmer Institute for Interdisciplinary Studies, and head of the Department of Humanities and Social Sciences. His research interests include molecular biology and intellectual property in Europe and the U.S., genetic privacy issues, and the history of eighteenth- and nineteenth-century German physics. Professor Jackson received his Ph.D. in the history and philosophy of science from the University of Cambridge. Before coming to NYU, he taught at Harvard University, the University of Pennsylvania, and the University of Chicago. He has been a senior fellow of the Dibner Institute for the History of Science and Technology at MIT and the Max-Planck-Institute for the History of Science in Berlin. He has published more than 35 articles, book chapters, and encyclopedia entries on the history of science and technology from the Scientific Revolution to the present. His most recent work, Harmonious Triads: Physicists, Musicians and Instrument Markers in Nineteenth-Century Germany (MIT Press), was released in 2006 with the paperback edition appearing in 2008. His first book, Spectrum of Belief: Joseph von Fraunhofer and the Craft of Precision Optics (MIT Press, 2000) received the Paul Bunge Prize from the German Chemical Society for the Best Work on Instrument Makers and the Hans Sauer Prize for the Best Work on the History of Invention. It was translated into German as Fraunhofers Spektren: Die Präzisionsoptik als Handwerkskunst (Wallstein Verlag, Göttingen, 2009). Professor Jackson received the Francis Bacon Prize for Contributions to the History of Science and Technology from Caltech. He has won teaching awards from Harvard and the University of Pennsylvania. He is a member of the New York Academy of Sciences and the Erfurt Academy of Sciences in Germany. He is currently working on a new project dealing with issues of intellectual property germane to the CCR5 gene.

Click here to listen to a recording of Myles Jackson’s talk for the IHC’s series Public Goods.