Memories Without Borders, Crimes Without Impunity: Judge Garzón, Spanish Courts and the Quest for Global Jurisdiction.”

Posted at 13:39h in Uncategorized, Upcoming Events by Admin 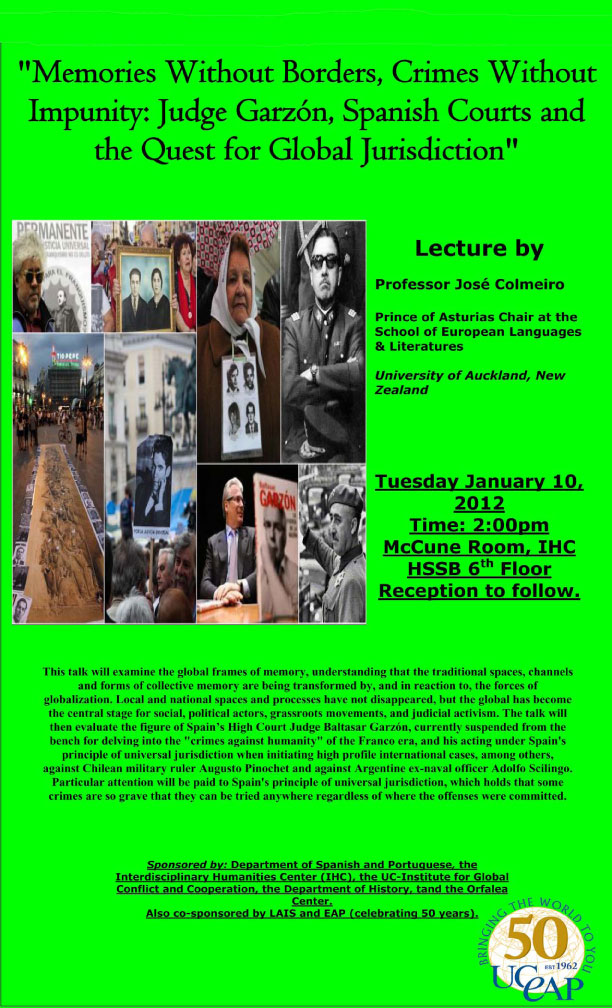 This talk will examine the global frames of memory, understanding that the traditional spaces, channels and forms of collective memory are being transformed by, and in reaction to, the forces of globalization. Local and national spaces and processes have not disappeared, but the global has become the central stage for social, political actors, grassroots movements, and judicial activism. The talk will then evaluate the figure of Spain’s High Court Judge Baltasar Garzón, currently suspended from the bench for delving into the “crimes against humanity” of the Franco era, and his acting under Spain’s principle of universal jurisdiction when initiating high profile international cases, among others, against Chilean military ruler Augusto Pinochet and against Argentine ex-naval officer Adolfo Scilingo. Particular attention will be paid to Spain’s principle of universal jurisdiction, which holds that some crimes are so grave that they can be tried anywhere regardless of where the offenses were committed.

Sponsored by the Department of Spanish and Portuguese, the UC- Institute for Global Conflict and Cooperation, the History Department, the Orfalea Center, LAIS and EAP, and the IHC.