Posted at 13:13h in Upcoming Events, IHC Series, The Anthropocene: Views from the Humanities by Admin 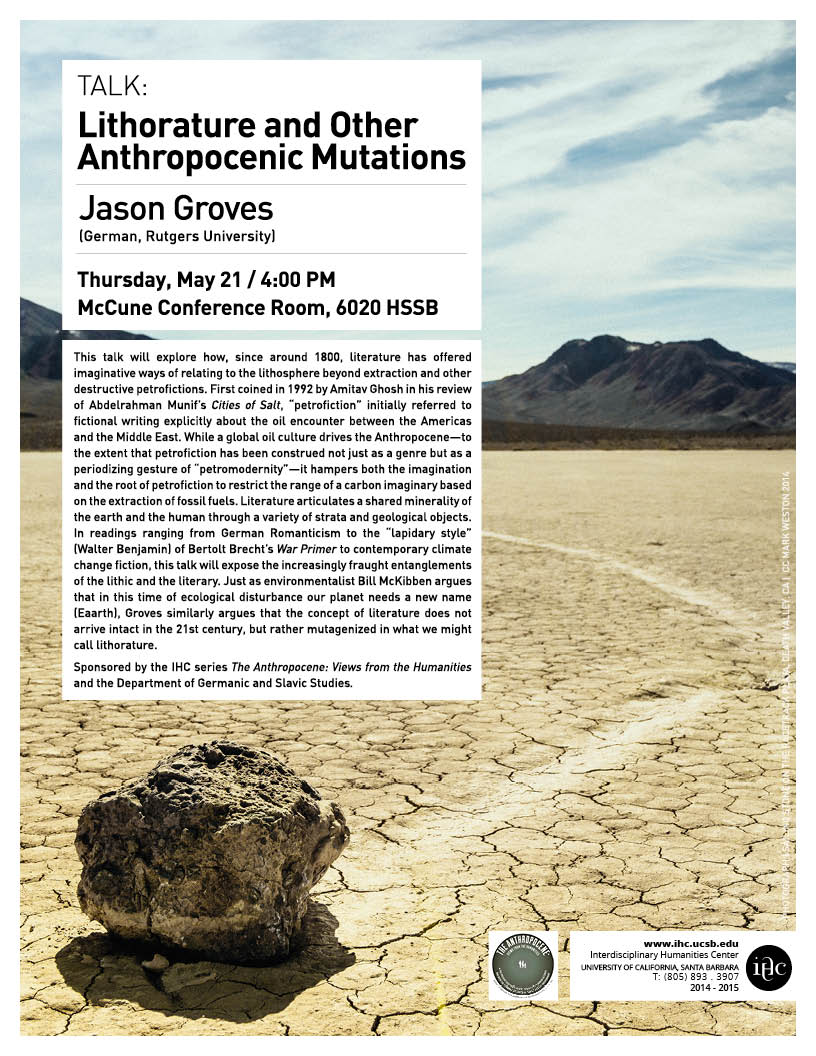 This talk will explore how, since around 1800, literature has offered imaginative ways of relating to the lithosphere beyond extraction and other destructive petrofictions. First coined in 1992 by Amitav Ghosh in his review of Abdelrahman Munif’s Cities of Salt, “petrofiction” initially referred to fictional writing explicitly about the oil encounter between the Americas and the Middle East. While a global oil culture drives the Anthropocene—to the extent that petrofiction has been construed not just as a genre but as a periodizing gesture of “petromodernity”—it hampers both the imagination and the root of petrofiction to restrict the range of a carbon imaginary based on the extraction of fossil fuels. Literature articulates a shared minerality of the earth and the human through a variety of strata and geological objects. In readings ranging from German Romanticism to the “lapidary style” (Walter Benjamin) of Bertolt Brecht’s War Primer to contemporary climate change fiction, this talk will expose the increasingly fraught entanglements of the lithic and the literary. Just as environmentalist Bill McKibben argues that in this time of ecological disturbance our planet needs a new name (Eaarth), I similarly argue that the concept of literature does not arrive intact in the 21st century, but rather mutagenized in what we might call lithorature.

Jason Groves received his Ph.D. in German Studies from Yale University and is currently a visiting lecturer at Rutgers University. His essays on literature, theater, and ecological thought have appeared in Modern Language Notes, Performance Studies, Society and Space, The Goethe Yearbook, Theory in the Era of Climate Change, and The Yearbook of Comparative Literature. His translation of Werner Hamacher’s For-Philology appeared with Fordham in March 2015. He is currently working on two projects: a translation of Sonja Neef’s Der babylonische Planet (The Babylonian Planet) and a monograph, Mineral Imaginaries: Literature for the Anthropocene, which articulates the shared minerality of the human and the earth in literature since 1800.

Sponsored by the IHC series The Anthropocene: Views from the Humanities and the Department of Germanic and Slavic Studies.