Negotiating Authority: The Criminalization of Religious Practice in the United States

23 May Negotiating Authority: The Criminalization of Religious Practice in the United States 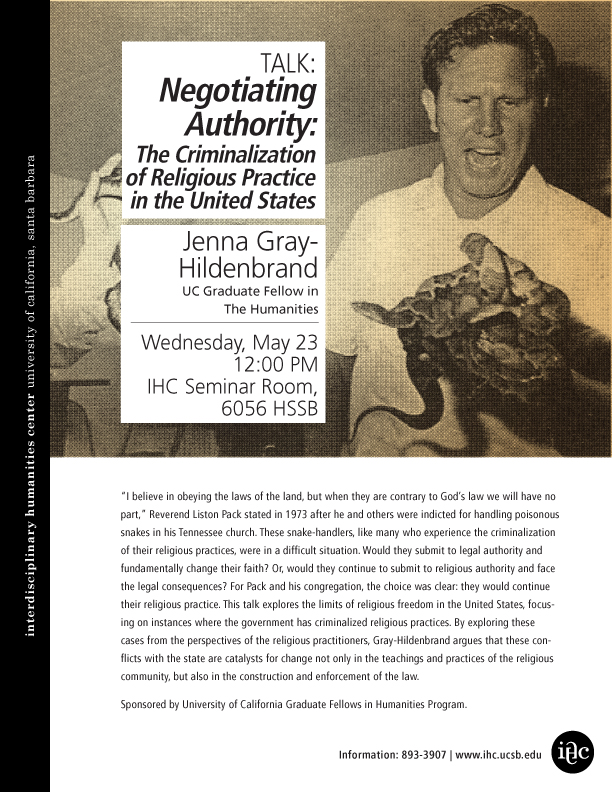 “I believe in obeying the laws of the land, but when they are contrary to God’s law we will have no part,” Reverend Liston Pack stated in 1973 after he and others were indicted for handling poisonous snakes in his Tennessee church. These snake-handlers, like many who experience the criminalization of their religious practices, were in a difficult situation. Would they submit to legal authority and fundamentally change their faith? Or, would they continue to submit to religious authority and face the legal consequences? For Pack and his congregation, the choice was clear; they would continue their religious practice. This talk explores the limits of religious freedom in the United States, focusing on instances where the government has criminalized religious practices. By exploring these cases from the perspectives of the religious practitioners, Gray-Hildenbrand argues that these conflicts with the state are catalysts for change not only in the teachings and practices of the religious community but also in the construction and enforcement of the law.

Sponsored by University of California Graduate Fellows in Humanities Program.