“I Long for my Home in Kentuck”: Christy’s Minstrels in Britain

Home > Upcoming Events  > “I Long for my Home in Kentuck”: Christy’s Minstrels in Britain

06 Oct “I Long for my Home in Kentuck”: Christy’s Minstrels in Britain 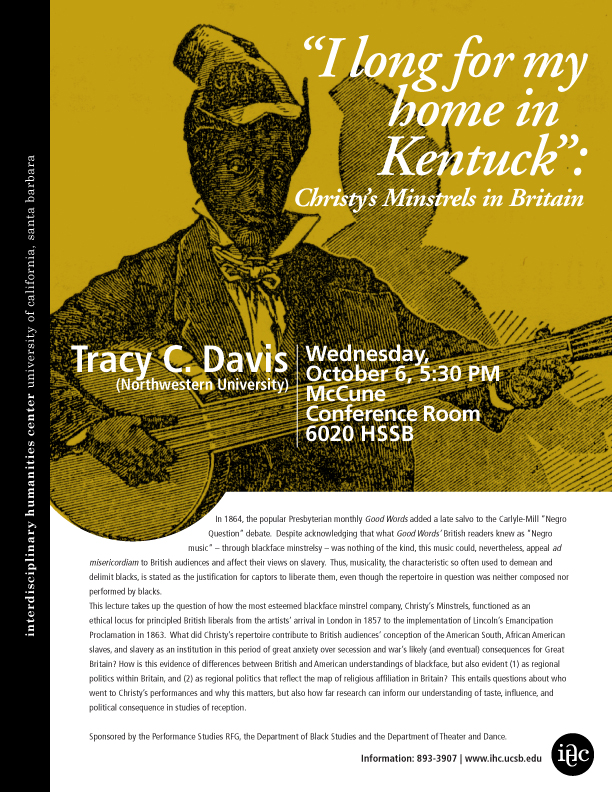 In 1864, the popular Presbyterian monthly Good Words added a late salvo to the Carlyle-Mill “Negro Question” debate. Despite acknowledging that what Good Words’ British readers knew as “Negro music” – through blackface minstrelsy – was nothing of the kind, this music could, nevertheless, appeal ad misericordiam to British audiences and affect their views on slavery. Thus, musicality, the characteristic so often used to demean and delimit blacks, is stated as the justification for captors to liberate them, even though the repertoire in question was neither composed nor performed by blacks.
This lecture takes up the question of how the most esteemed blackface minstrel company, Christy’s Minstrels, functioned as an ethical locus for principled British liberals from the artists’ arrival in London in 1857 to the implementation of Lincoln’s Emancipation Proclamation in 1863. What did Christy’s repertoire contribute to British audiences’ conception of the American South, African American slaves, and slavery as an institution in this period of great anxiety over secession and war’s likely (and eventual) consequences for Great Britain? How is this evidence of differences between British and American understandings of blackface, but also evident (1) as regional politics within Britain, and (2) as regional politics that reflect the map of religious affiliation in Britain? This entails questions about who went to Christy’s performances and why this matters, but also how far research can inform our understanding of taste, influence, and political consequence in studies of reception.

Sponsored by the IHC’s Performance Studies RFG and the Department of Theater and Dance.