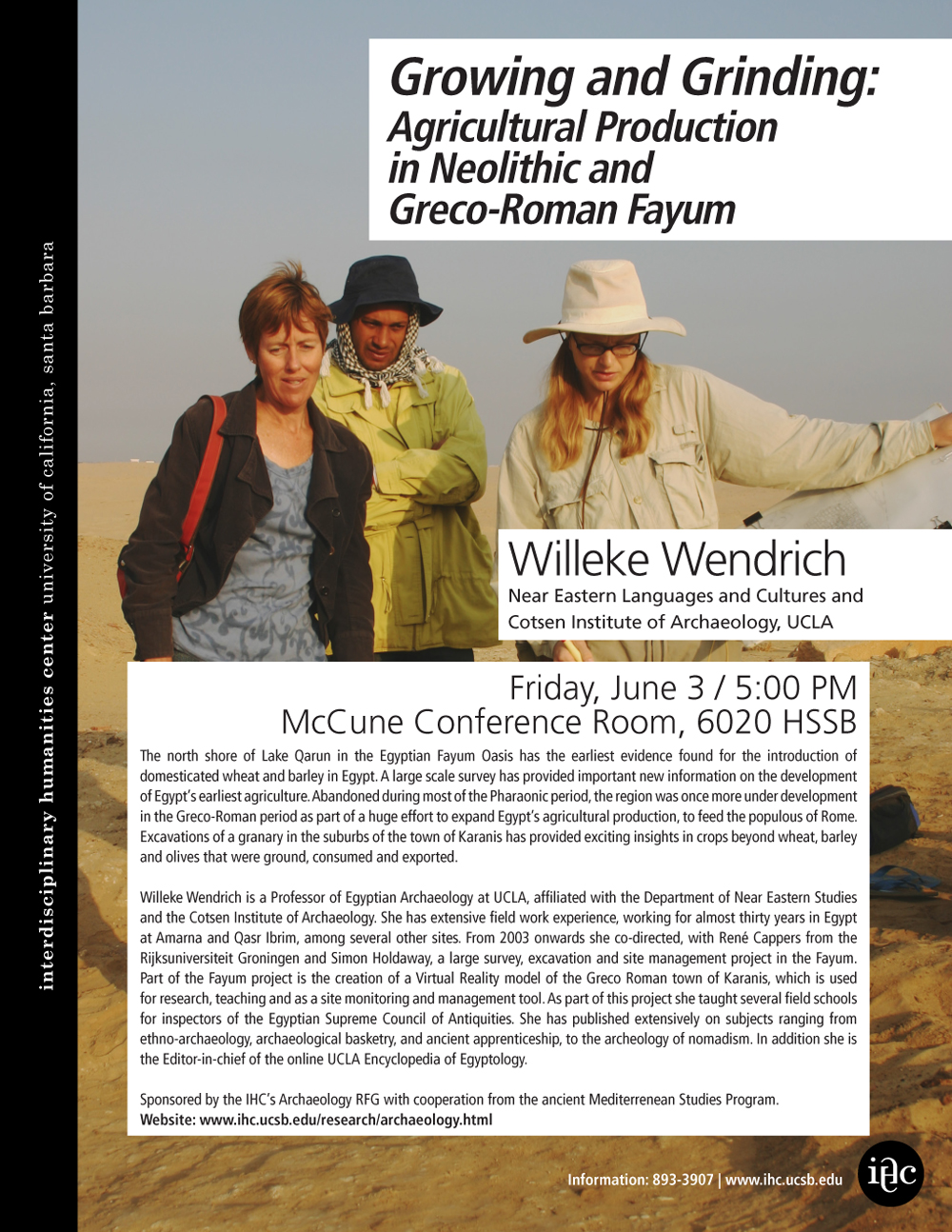 The north shore of Lake Qarun in the Egyptian Fayum Oasis has the earliest evidence found for the introduction of domesticated wheat and barley in Egypt. A large scale survey has provided important new information on the development of Egypt’s earliest agriculture. Abandoned during most of the Pharaonic period, the region was once more under development in the Greco-Roman period as part of a huge effort to expand Egypt’s agricultural production, to feed the populous of Rome. Excavations of a granary in the suburbs of the town of Karanis has provided exciting insights in crops beyond wheat, barley and olives that were ground, consumed and exported.
Willeke Wendrich  is a Professor of Egyptian Archaeology at UCLA, affiliated with the Department of Near Eastern Studies and the Cotsen Institute of Archaeology. She has extensive field work experience, working for almost thirty years in Egypt (at Amarna and Qasr Ibrim, among several other sites). She also participated in the Catal Hoyuk excavations in Turkey, and directed a field survey in the Yemeni highlands. The Berenike Excavations, co-directed with Steven Sidebotham ran from 1994 to 2002. She developed an information center on the present day culture of the Ababda nomads. From 2003 onwards she co-directed, with René Cappers from the Rijksuniversiteit Groningen (the Netherlands) and Simon Holdaway (University of Auckland, New Zealand), a large survey, excavation and site management project in the Fayum. Part of the Fayum project is the creation of a Virtual Reality model of the Greco Roman town of Karanis, which is used for  research, teaching and as a site monitoring and management tool. As part of this project she taught several field schools for inspectors of the Egyptian Supreme Council of Antiquities. She has published extensively on subjects ranging from ethno-archaeology, archaeological basketry, and ancient apprenticeship, to the archeology of nomadism (edited volume with Hans Barnard).  In addition she is the Editor-in-chief of the online UCLA Encyclopedia of Egyptology.

Sponsored by the IHC’s Archaeology RFG with cooperation from the ancient Mediterranean Studies Program
Website: https://www.ihc.ucsb.edu/research/archaeology.html