From Godzilla to Hello Kitty: Sanitizing the Uncanny in Postwar Japan

Home > Series  > From Godzilla to Hello Kitty: Sanitizing the Uncanny in Postwar Japan

03 Mar From Godzilla to Hello Kitty: Sanitizing the Uncanny in Postwar Japan 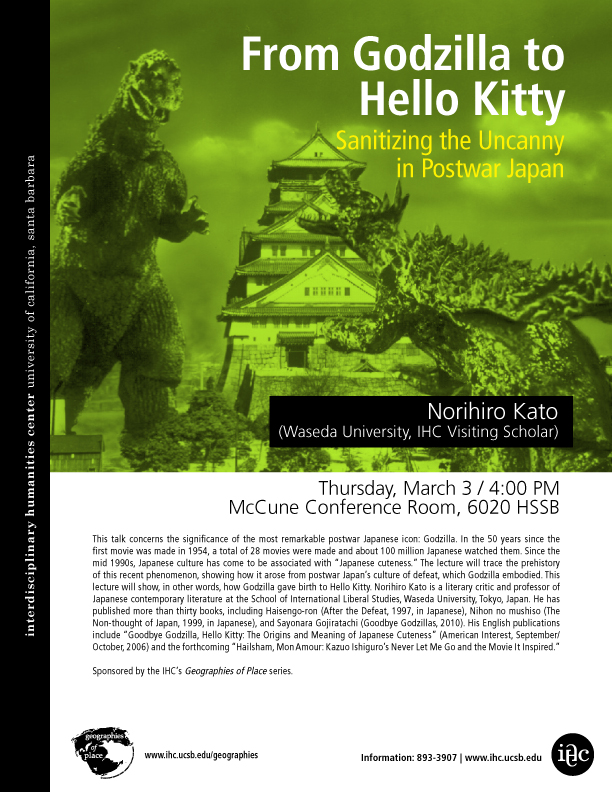 This talk concerns the significance of the most remarkable postwar Japanese icon: Godzilla. In the 50 years since the first movie was made in 1954, a total of 28 movies were made and about 100 million Japanese watched them. Since the mid 1990s, Japanese culture has come to be associated with “Japanese cuteness.” The lecture will trace the prehistory of this recent phenomenon, showing how it arose from postwar Japan’s culture of defeat, which Godzilla embodied. This lecture will show, in other words, how Godzilla gave birth to Hello Kitty. Norihiro Kato is a literary critic and professor of Japanese contemporary literature at the School of International Liberal Studies, Waseda University, Tokyo, Japan. He has published more than thirty books, including Haisengo-ron (After the Defeat, 1997, in Japanese), Nihon no mushiso (The Non-thought of Japan, 1999, in Japanese), and Sayōnara Gojiratachi (Goodbye Godzillas, 2010). His English publications include “Goodbye Godzilla, Hello Kitty: The Origins and Meaning of Japanese Cuteness” (American Interest, September/October, 2006) and the forthcoming “Hailsham, Mon Amour: Kazuo Ishiguro’s Never Let Me Go and the Movie It Inspired.”