Future-Tense Trauma Cinema [with reference to Cuarón’s Children of Men (2006)].

Posted at 14:19h in Upcoming Events by Admin 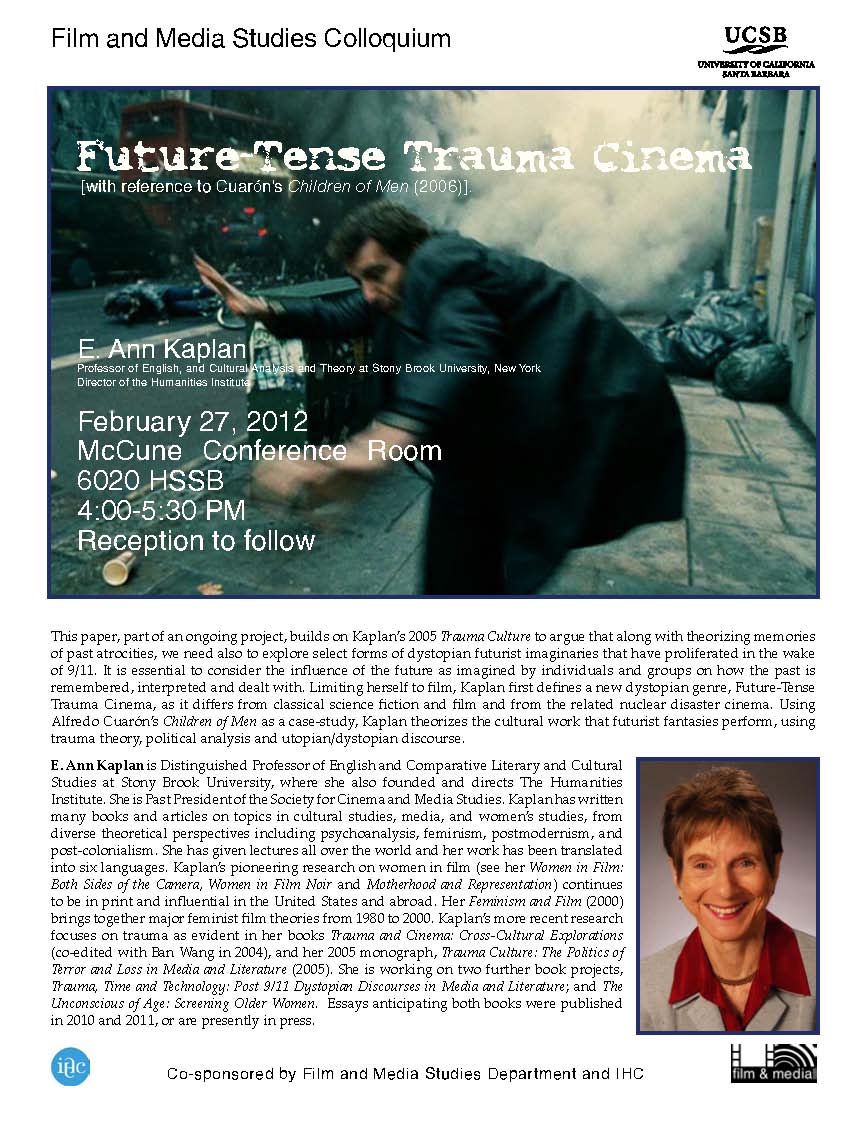 This paper, part of an ongoing book project, builds on Kaplan’s 2005 Trauma Culture to argue that along with theorizing memories of past atrocities, we need also to explore a select form of futurist imaginaries that have proliferated in the wake of 9/11. As authors of a recent volume put it, it’s essential to consider “the influence of the future—as imagined and desired by individuals and groups—on how the past is remembered, interpreted and dealt with, and vice versa.” Limiting herself to film, Kaplan first defines a new genre, Future-Tense Trauma Cinema, distinct from age-old Science Fiction and Film, and from the related Nuclear Disaster cinema. Using Children of Men as a case-study, Kaplan then theorizes the cultural (subjective and collective) work that futurist fantasies perform, using trauma theory (and psychoanalysis more generally), political theory, Utopian/dystopian discourse, and sociology. As far as time allows, Kaplan will also interrogate concepts (e.g. “trauma,” “dystopia”) on which her argument relies.

Co-sponsored by the Department of Film and Media Studies and the IHC.

E. Ann Kaplan is Distinguished Professor of English and Comparative Literary and Cultural Studies at Stony Brook University, where she also founded and directs The Humanities Institute. She is Past President of the Society for Cinema and Media Studies. Kaplan has written many books and articles on topics in cultural studies, media, and women’s studies, from diverse theoretical perspectives including psychoanalysis, feminism, postmodernism, and post-colonialism. She has given lectures all over the world and her work has been translated into six languages. Kaplan’s pioneering research on women in film (see her Women in Film: Both Sides of the Camera, Women in Film Noir and Motherhood and Representation) continues to be in print and influential in the United States and abroad. Her Feminism and Film (2000) brings together major feminist film theories from 1980 to 2000. Kaplan’s more recent research focuses on trauma as evident in her books Trauma and Cinema: Cross-Cultural Explorations (co-edited with Ban Wang in 2004), and her 2005 monograph, Trauma Culture: The Politics of Terror and Loss in Media and Literature (2005). She is working on two further book projects, Trauma, Time and Technology: Post 9/11 Dystopian Discourses in Media and Literature; and The Unconscious of Age: Screening Older Women.  Essays anticipating both books were published in 2010 and 2011, or are presently in press.