Posted at 15:04h in Upcoming Events by Admin 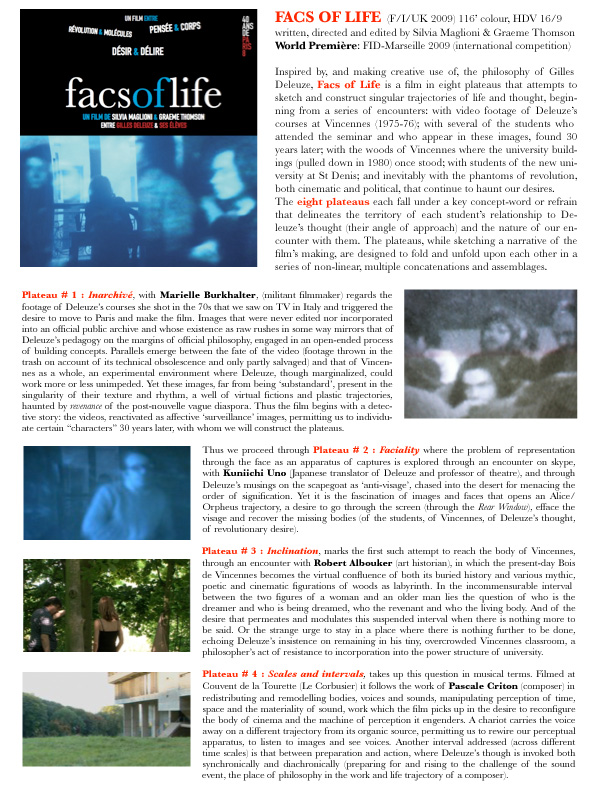 Click here for more info about Facs of Life

Silvia Maglioni and Graeme Thomson are the co-directors of Facs of Life, a feature documentary on Deleuze.  Inspired by, and making creative use of, the philosophy of Gilles Deleuze, Facs of Life is a film in eight plateaus that attempts to sketch and construct singular trajectories of life and thought, beginning from a series of encounters: with video footage of Deleuze’s courses at Vincennes (1975-76); with several of the students who attended the seminar and who appear in these images, found 30 years later; with the woods of Vincennes where the university build- ings (pulled down in 1980) once stood; with students of the new uni- versity at St Denis; and inevitably with the phantoms of revolution, both cinematic and political, that continue to haunt our desires.   The eight plateaus each fall under a key concept-word or refrain that delineates the territory of each student’s relationship to De- leuze’s thought (their angle of approach) and the nature of our en- counter with them. The plateaus, while sketching a narrative of the film’s making, are designed to fold and unfold upon each other in a series of non-linear, multiple concatenations and assemblages.

This event is joint colloquium of the Department of Art and Department of Film and Media Studies Departments and sponsored by an IHC collaborative award.