Everybody Must Get Stones: The Iranian Search for Lithographic Technology

Home > Upcoming Events  > Everybody Must Get Stones: The Iranian Search for Lithographic Technology

14 May Everybody Must Get Stones: The Iranian Search for Lithographic Technology 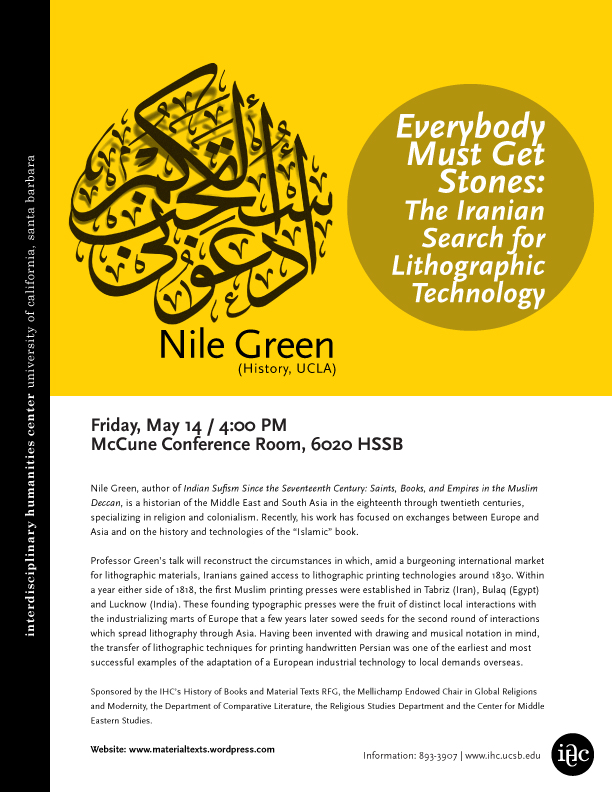 Unfortunately, this event has been canceled.

Around 1818 the first Muslim printing presses were established in Tabriz (Iran), Bulaq (Egypt) and Lucknow (India). These founding typographic presses were the fruit of distinct local interactions with the industrializing marts of Europe that a few years later sowed seeds for the second round of interactions which spread lithography through Asia. Having been invented with drawing and musical notation in mind, the transfer of lithographic techniques for printing handwritten Persian was one of the earliest and most successful examples of the adaptation of a European industrial technology to local demands overseas. Nile Green, author of Indian Sufism Since the Seventeenth Century: Saints, Books, and Empires in the Muslim Deccan, is a historian of the Middle East and South Asia in the eighteenth through twentieth centuries, specializing in religion and colonialism. Recently, his work has focused on exchanges between Europe and Asia and on the history and technologies of the “Islamic” book.

Sponsored by the IHC’s History of Books and Material Texts RFG, the Mellichamp Endowed Chair in Global Religions and Modernity, the Department of Comparative Literature, the Department of Religious Studies and the Center for Middle East Studies.