Climate Data Detectives: On the History and Politics of Knowledge about Global Climate Change

Home > Series  > The Anthropocene: Views from the Humanities  > Climate Data Detectives: On the History and Politics of Knowledge about Global Climate Change

19 Feb Climate Data Detectives: On the History and Politics of Knowledge about Global Climate Change

Posted at 12:30h in The Anthropocene: Views from the Humanities, Upcoming Events, IHC Series, IHC Research Focus Groups by Admin 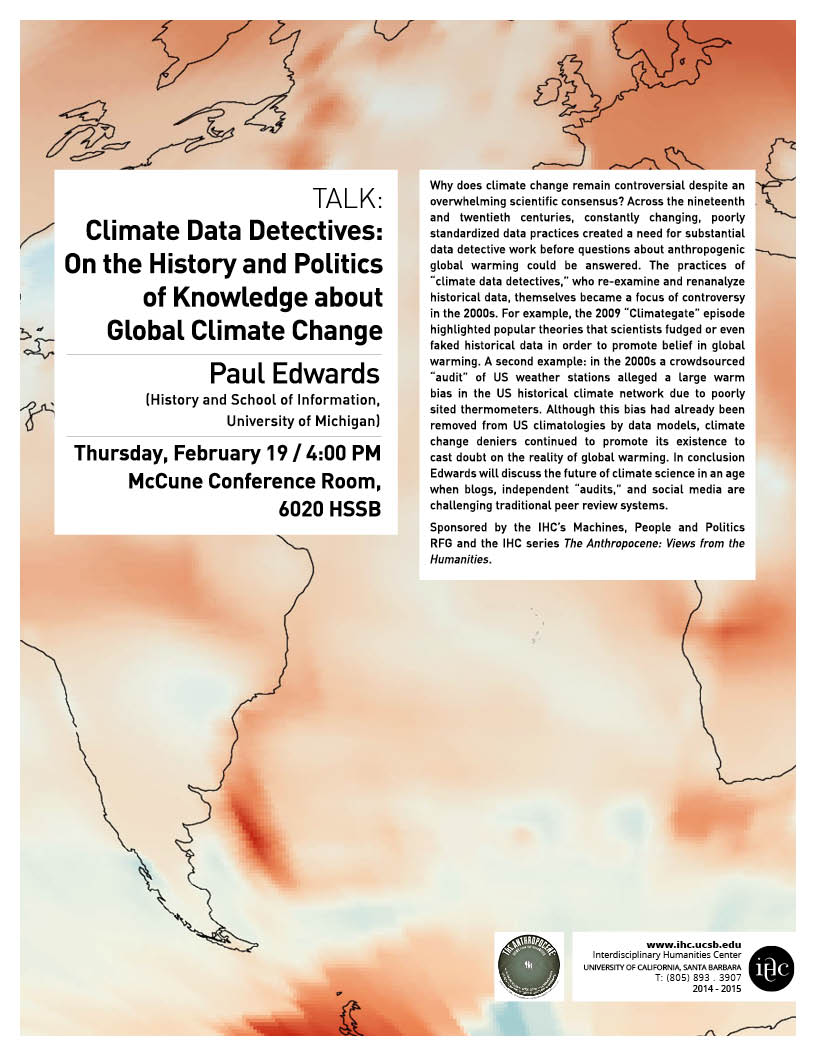 Why does climate change remain controversial despite an overwhelming scientific consensus? Across the nineteenth and twentieth centuries, constantly changing, poorly standardized data practices created a need for substantial data detective work before questions about anthropogenic global warming could be answered. The practices of “climate data detectives,” who re-examine and renanalyze historical data, themselves became a focus of controversy in the 2000s. For example, the 2009 “Climategate” episode highlighted popular theories that scientists fudged or even faked historical data in order to promote belief in global warming. A second example: in the 2000s a crowdsourced “audit” of US weather stations alleged a large warm bias in the US historical climate network due to poorly sited thermometers. Although this bias had already been removed from US climatologies by data models, climate change deniers continued to promote its existence to cast doubt on the reality of global warming. In conclusion Edwards will discuss the future of climate science in an age when blogs, independent “audits,” and social media are challenging traditional peer review systems.

Paul N. Edwards is Professor in the School of Information and the Dept. of History at the University of Michigan. His research focuses on the history, politics, and culture of information technologies and infrastructures. Edwards is the author of A Vast Machine: Computer Models, Climate Data, and the Politics of Global Warming (MIT Press, 2010), a history of the meteorological information infrastructure, and The Closed World: Computers and the Politics of Discourse in Cold War America (MIT Press, 1996), a study of the mutual shaping of computers, military culture, and the cognitive sciences from 1945-1990. He has been a Carnegie Scholar and a Guggenheim Fellow. Edwards’ current research concerns the history and future of knowledge infrastructures.

Sponsored by the IHC’s Machines, People and Politics RFG and the IHC series The Anthropocene: Views from the Humanities.