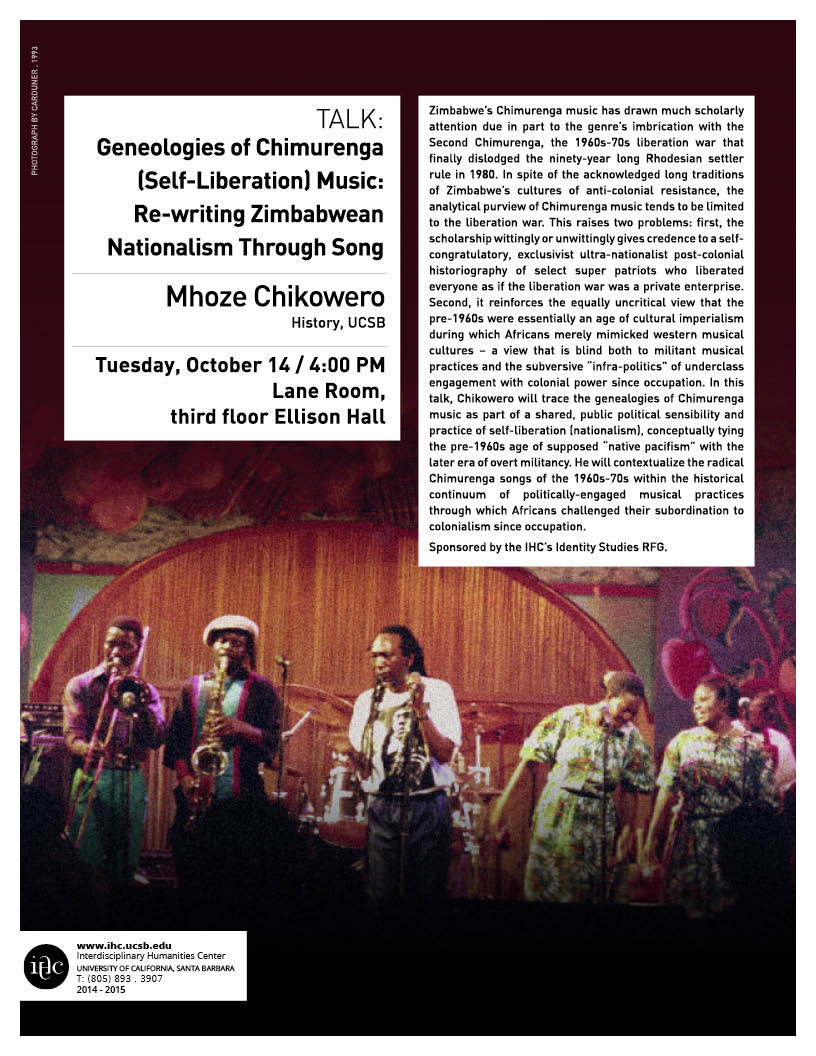 Zimbabwe’s Chimurenga music has drawn much scholarly attention due in part to the genre’s imbrication with the Second Chimurenga, the 1960s-70s liberation war that finally dislodged the 90-year long Rhodesian settler rule in 1980. In spite of the acknowledged long traditions of Zimbabwe’s cultures of anti-colonial resistance, the analytical purview of Chimurenga music tends to be limited to the liberation war. This raises two problems: firstly, the scholarship wittingly or unwittingly gives credence to a self-congratulatory, exclusivist ultra-nationalist post-colonial historiography of select super patriots who liberated everyone as if the liberation war was a private enterprise. Secondly, it reinforces the equally uncritical view that the pre-1960s were essentially an age of cultural imperialism during which Africans merely mimicked western musical cultures–a view that is blind both to militant musical practices and the subversive “infra-politics” of underclass engagement with colonial power since occupation. In this talk, Chikowero will trace the genealogies of Chimurenga music as part of a shared, public political sensibility and practice of self-liberation (nationalism), conceptually tying the pre-1960s age of supposed “native pacifism” with the later era of overt militancy. He will contextualize the radical Chimurenga songs of the 1960s-70s within the historical continuum of politically engaged musical practices through which Africans challenged their subordination to colonialism since occupation.

Mhoze Chikowero is an Assistant Professor of African History at the University of California, Santa Barbara. He was born and grew up in Zimbabwe. He did his BA Hons. at the University of Zimbabwe and finished his graduate studies at Dalhousie University (Canada) in 2008. Before joining the University California, Chikowero was a postdoctoral fellow at Rutgers University’s Center for Historical Analysis in 2009. His book on Zimbabwean music and power, African Music, Power and Being: Colonial Zimbabwe is forthcoming with Indiana University Press. He is currently an American Council of Learned Scholars Visiting Research Fellow at Wits—the University of the Witwatersrand in Johannesburg where he working on two book projects: music and power in post-colonial Zimbabwe and on broadcasting and state-making in colonial Southern Africa. His publications have appeared in key journals on Southern Africa and in edited volumes.