Beyond Protest: Considering the UC Strike

Home > Series  > Future of the University  > Beyond Protest: Considering the UC Strike

Posted at 15:28h in Future of the University, Upcoming Events, IHC Series by Admin 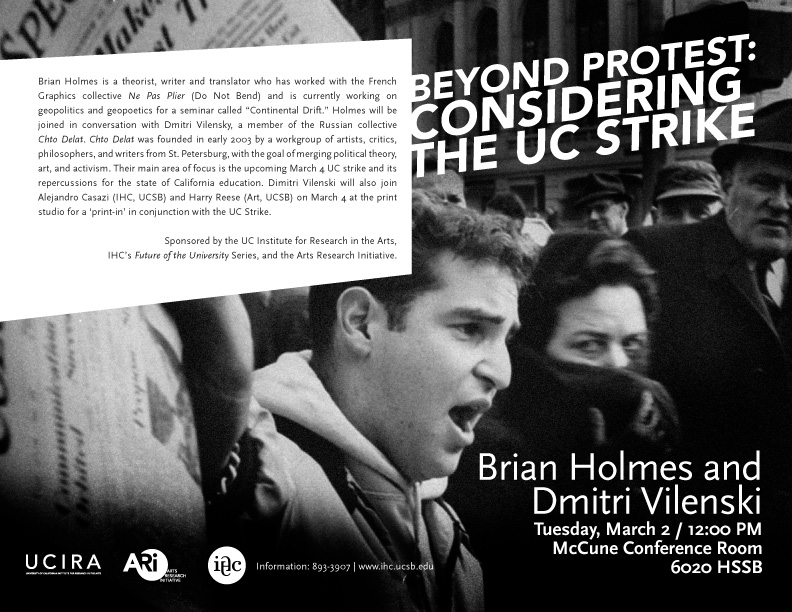 Brian Holmes is a theorist, writer and translator who has worked with the French Graphics collective Ne Pas Plier (Do Not Bend) and is currently working on geopolitics and geopoetics for a seminar called “Continental Drift.”  Holmes will be joined in conversation with Dmitri Vilensky, a member of the Russian collective Chto Delat.  Chto Delat was founded in early 2003 by a workgroup of artists, critics, philosophers, and writers from St. Petersburg, with the goal of merging political theory, art, and activism. Their main area of focus is the upcoming March 4 UC strike and its repercussions for the state of California education.  Dimitri Vilenski will also join Alejandro Casazi (IHC, UCSB) and Harry Reese (Art, UCSB) on March 4 at the print studio for a ‘print-in’ in conjunction with the UC Strike.

Sponsored by the UC Institute for Research in the Arts, IHC’s Future of the University Series, and the Arts Research Initiative.