Between Culture and Consciousness: On the Role of Effigies in Tamil Rituals

Home > Upcoming Events  > IHC Research Focus Groups  > Between Culture and Consciousness: On the Role of Effigies in Tamil Rituals

19 May Between Culture and Consciousness: On the Role of Effigies in Tamil Rituals

Posted at 13:05h in IHC Research Focus Groups by Admin 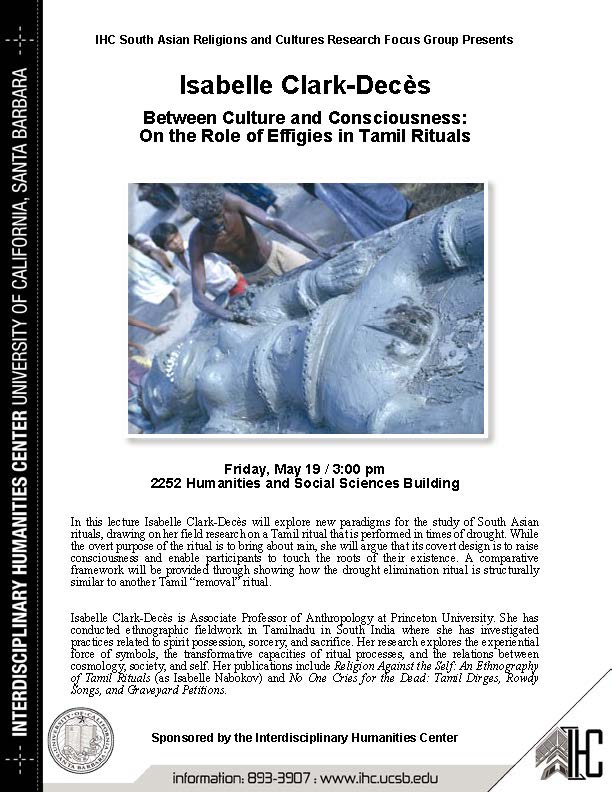 In this lecture Isabelle Clark-Decès explored new paradigms for the study of South Asian rituals, drawing on her field research on a Tamil ritual that is performed in times of drought. While the overt purpose of the ritual is to bring about rain, she argued that its covert design is to raise consciousness and enable participants to touch the roots of their existence. A comparative framework was provided through showing how the drought elimination ritual is structurally similar to another Tamil “removal” ritual.

Isabelle Clark-Decès is Associate Professor of Anthropology at Princeton University. She has conducted ethnographic fieldwork in Tamilnadu in South India where she has investigated practices related to spirit possession, sorcery, and sacrifice. Her research explores the experiential force of symbols, the transformative capacities of ritual processes, and the relations between cosmology, society, and self. Her publications include Religion Against the Self: An Ethnography of Tamil Rituals (as Isabelle Nabokov) and No One Cries for the Dead: Tamil Dirges, Rowdy Songs, and Graveyard Petitions.