“A War Between Soldiers and Prophets”: Embodied Resistance in Colonial Belgian Congo

02 May “A War Between Soldiers and Prophets”: Embodied Resistance in Colonial Belgian Congo 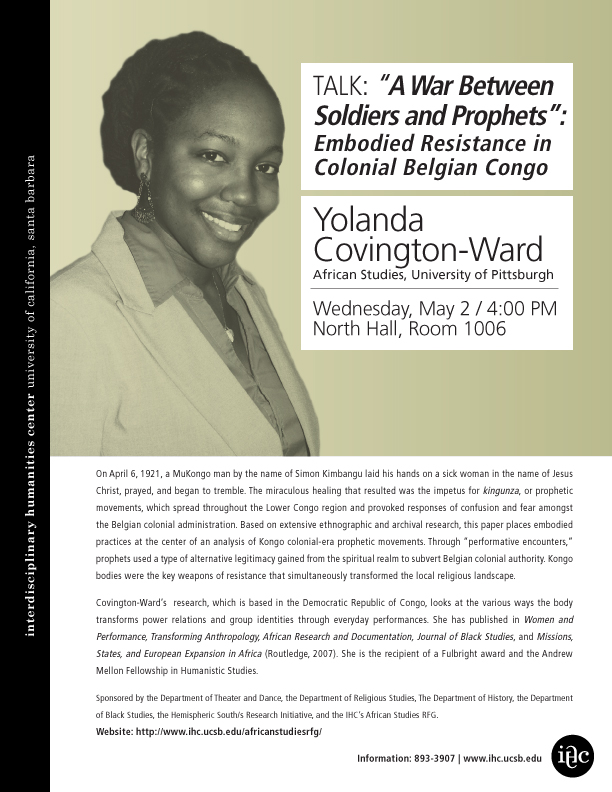 On April 6, 1921, a MuKongo man by the name of Simon Kimbangu laid his hands on a sick woman in the name of Jesus Christ, prayed, and began to tremble.  The miraculous healing that resulted was the impetus for kingunza, or prophetic movements, which spread throughout the Lower Congo region and provoked responses of confusion and fear amongst the Belgian colonial administration.  Based on extensive ethnographic and archival research, this paper places embodied practices at the center of an analysis of Kongo colonial-era prophetic movements. Through “performative encounters,” prophets used a type of alternative legitimacy gained from the spiritual realm to subvert Belgian colonial authority. Kongo bodies were the key weapons of resistance that simultaneously transformed the local religious landscape.

Covington-Ward’s  research, which is based in the Democratic Republic of Congo, looks at the various ways the body transforms power relations and group identities through everyday performances. She has published in Women and Performance, Transforming Anthropology, African Research and Documentation, Journal of Black Studies, and Missions, States, and European Expansion in Africa (Routledge, 2007). She is the recipient of a Fulbright award and the Andrew Mellon Fellowship in Humanistic Studies.